I am going to start from the fourth most popular shot as voted by viewers of my recent photo display. That is the image of the Illecillewaet valley from Hermit Meadows. I wanted to include this one for two reasons; first, it is the only shot in the top four that is from Canada, and the second reason is that I really like this picture – always a good reason to write about something! Nine percent of people voted this picture as being their favorite.

In August of 2008 I decided to hike into Hermit Meadows on the north side of the trans-Canada highway in Rogers Pass, British Columbia. Rogers Pass, and the Selkirk Mountains in general, is one of my favorite places in western Canada. Hermit Meadows is also quite the grueling hike in. The trail is only 2.8 kilometers long one-way, but the elevation gain is 770 meters – that’s steeper than 1 in 4! Yep, with tent, food, and camera gear, it is quite a slog. This is definitely one of these occasions however, where the effort is rewarded at the end. The trail finishes in a beautiful alpine meadow at the edge of a series of glacial moraines. Turning around and looking back the way you came, there is an incredible panorama of the southern Selkirk Mountains. Amongst the rocks in the lower sections of the moraines Parks Canada has constructed a series of wooden tent pads. On ones of these pads is where I slept for two nights after arriving.

A large cirque of mountain peaks swings from the south-west of the camping area in a northerly arc, finishing with one of the more imposing peaks in the area, Mt Tupper, to the north-east. The terrain in this area is a veritable playground for the hiker, mountaineer, or, of course, photographer. I spent most of my time photographing on the slopes of Mt. Tupper. To access this area I would walk through the meadows to access the eastern moraines. The image presented here is what I found the first time I walked though one of these meadows, but this particular shot was from later in the trip. It really was quite amazing; I was hiking along with my day pack and camera gear and looked over to my right. I saw this image and was just stunned. I stopped, looked, took it in, and let it out. It was big and represented everything I love about being in the mountains. It also represented everything that is challenging about effectively creating images that convey that feeling. I stood and looked and considered how my camera would see it – lens, perspective, lighting. Thinking that I would not do the justice to the vision, I walked on and headed for easier subject matter. 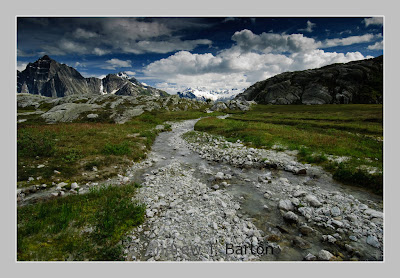 Later in the day I was returning to my tent for a mid afternoon siesta and I walked through the same meadow. I was hit with the same feeling. For me it is an “oh my god this is so beautiful and nothing in the world matters more than what I am looking at right now” kind of feeling. I stopped and took in the vista once again. This time I just had to do something about it and started unpacking my camera and tripod. It definitely needed to be a wide angle shot and so I fitted my trusty Nikkor 12-24 mm f/4. I haven’t told you yet how much I love this lens, but, I love this lens! On the business end of the lens I also fitted a B+W circular polarizer filter. Mounted on the tripod I cranked the focal length down to 12 mm and pointed the camera towards the ground so as to use lots of foreground for perspective. The stream serves as the perfect lead-in that draws you through the picture to the Asulkan Valley off in the distance. Exposure on this image was 1/160th at f/6.3. ISO 100. I feel quite satisfied with this shot, and from the comments I received from people, it conveys some of the emotion I felt on the day. I am looking forward to practicing on these kinds of shots a lot more!

So what is your critique? I would love to hear what you think.